What makes the 2016 MINI John Cooper Works convertible so much different than the 2015 version? Well, for starters, the 2016 MINI JCW convertible has a 2.0-Liter, four cylinder engine that produces 228 horsepower and goes from 0 – 60 mph in only 6.3 seconds. Maxing out at about 150 mph, this convertible can really get the wind whipping through your hair.

The 2016 JCW Convertible has a sleek cloth soft top that can open and close in 18 seconds at speeds up to 18 mph. So, if the rain warning system this MINI convertible is equipped with tells you of an upcoming storm, you can close the roof in a hurry. Of course, once the roof is closed, you will still enjoy the drive with the 6.5-inch infotainment system, dual-zone climate control, and optional heated seats that are perfect for our cold Pittsburgh mornings.

We expect to be able to have the John Cooper Works convertible available for you in April with a base price of just under $36,000.  Come talk to our MINI experts to learn more about the fastest MINI Convertible to date.

The 2016 MINI John Cooper Works Concept was first revealed at this year’s North American International Auto Show in Detroit. The newest JCW proved to be quicker and more powerful than any model before it.

The MINI John Cooper Works revealed in Detroit featured larger air inlets, an updated front grille, a new diffuser, and a new, more powerful four cylinder. As it turns out, the 2016 JCW is the most powerful MINI ever produced.

New spy shots released by TopSpeed suggest that a 2016 JCW convertible version is well on its way to production. Presumably in the testing phase, a camouflaged 2016 MINI John Cooper Works Convertible has been spotted out and about. The performance-oriented convertible will likely see an official reveal in the next few months, possibly as soon as the New York Auto Show in April, ultimately finding its way into dealerships just in time for the 2016 model year.

Though no official details have been released, we can speculate that the JCW convertible will be similar to the John Cooper Works coupe, which is already in production. The hardtop JCW features black wheel arches, JCW logos, body-colored side skirts, black stripes with Chili Red lines, and a brand new Rebel Green Metallic exterior paint, an exclusive to the JCW line. We would expect most of these features to carry over to the convertible, though only time will tell.

Here at MINI of Pittsburgh, we’ll keep you updated with new details as we get them!

Eight minutes and twenty-three seconds. That’s how long it took the 2013 MINI John Cooper Works GP to lap the legendary Nürburgring Nordschleife. Finishing the lap a significant nineteen seconds ahead of its predecessor, the 2013 JCW GP is the fastest MINI to date.

The 2013 MINI John Cooper Works GP, as you can probably guess, is essentially the MINI JCW with more of the fun, spirited driving dynamics that are uniquely MINI. A sporty body kit featuring a rear diffuser, a carbon-fiber wing above the backlight, and new side skirts don this machine. Bright red mirrors and four-spoke wheels are to its one-of-kind appearance. The rear seat has been removed for weight reduction, and the GP is expected to get the same 211 horsepower the JCW Countryman has.

As a limited edition, only 2,000 GPs will be built and sold globally, making it a rare addition to anyone’s garage. Watch for the arrival of the MINI John Cooper Works GP, expected to be offered for sale later this year, and don’t miss your chance to own the fastest MINI ever built.

A suite of new high-performance MINIs is coming to town. The John Cooper Works line of MINIs pack a punch of power and fuel efficiency as the newest incarnation of the MINIMALISM attitude.

The principle behind MINIMALISM relies on engine efficiency in fuel consumption and emission-reducing technology. The MINI John Cooper Works has both of these, while still offering instant power on the pedal.

The 2013 models will carry a next-generation John Cooper Works engine based on the powertrain in the MINI Cooper S. This powerhouse will use a twin-scroll turbocharger, direct injection and VALVETRONIC variable valve control. The VALVETRONIC throttle-free load control boosts the response of the engine, in addition to improving efficiency.

The 1.6-liter, 208 hp, four-cylinder engine is paired with a 6-speed manual gearbox, with an optional automatic that features Steptronic function. The electric motor only uses energy when power is needed, which helps to reduce fuel consumption. However, fuel efficiency hasn’t affected the power and fun in the drive. The 2013 MINI John Cooper Works Hardtop can hit 60 from 0 in just 6.2 seconds. The ‘overboost’ function will take the new John Cooper Works engine from 192 lbs-feet of torque up to 207. 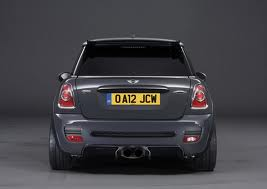 MINI had plenty on hand for visitors to the Geneva Motor Show 2012. MINI brought along five new MINI vehicles to show off for their world premiere to guests to the show. The new MINI Clubvan Concept vehicle, MINI John Cooper Works Countryman, and three special models all premiered globally for the first time.

The John Cooper Works Countryman definitely is the sportiest of the MINI vehicles The MINI John Cooper Works Countryman has an updated engine that improves the power and efficiency of the vehicle as well as the option to have an automatic transmission for the first time. . Loaded with the ALL4 all-wheel-drive system, it is ready to take on all road and weather conditions thrown its way.

MINI also put the new Clubvan Concept on the stage for visitors to enjoy. The new concept vehicle looks to enter in a new segment for business and personal use of a premium small car with extra room. It differs from the Countryman by having only a two-seat layout and a large, flat load compartment with opaque rear windows.

The other three models to grace the stage were the MINI Baker Street and Bayswater Olympic editions and the MINI Highgate convertible vehicle. The special Olympic edition MINIs are Hardtop versions with exclusive equipment and special branding. 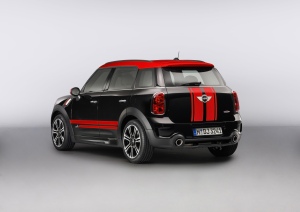 As drivers turn each corner and maneuver in the new Countryman, the suspension is ready to flow with every movement of the vehicle and give the great agility they are known for.  The John Cooper Works Countryman jumps off the line, going 0 to 62 mph in 7.1 seconds and early European fuel economy tests show that it will attain 39.2 mpg.  Chassis design on the new Countryman incorporates a front axle with MacPherson struts, central-arm rear axle, Electric Power Steering, and a high-performance braking system.

Stay tuned for more information as we approach fall 2012 with the release of the John Cooper Works Countryman.